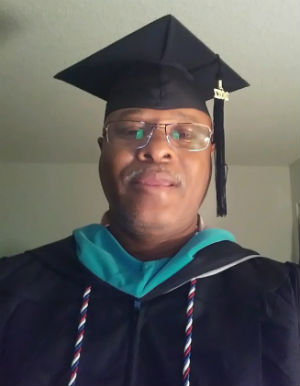 “I graduated on December 9, 2017,” he said. “I lost my mom [Lanie Harris] on the 14th. We buried her on the 23rd. While I was going to school, I was taking her back and forth to the hospital and doing two classes. She wasn’t able to go to graduation, but I got home and told her about it. My mom was very pleased with me getting my degree before she left.”

Ceasar was determined to take full advantage of a higher education opportunity that his mother was never afforded. In fact, she was the primary reason he returned to school for a Master of Public Administration degree.

“I really did it for my mom — I didn’t do it for me,” he said. “I went back for my mom because she dropped out of school in the third grade to help her family raise 15 kids. Back then, that’s how they were doing it. My mom was a single parent with three boys. She was our cornerstone.”

Ceasar, who retired from the military after 32 years as a sergeant first class, is a supply tech in charge of shipping and receiving for the United States Coast Guard in Fort Lauderdale, Florida.

He completed some college through the University of Maryland while serving overseas. After chipping away one class at a time for several years, Ceasar earned a Bachelor of Arts in Public Administration from Vincennes University prior to enrolling at Barry.

“I traveled so much with the military that I really didn’t have time to sit down and pursue college,” Ceasar said. “I said, ‘Let me go and get it.’ I always tell high school kids and kids who have dropped out of college, ‘Look, you need to go back.’ How can I tell them to go back unless I went back? I want to lead by example.”

One of the reasons Ceasar enrolled at Barry University was because it felt like home from the beginning. He chose Barry with the help of Carla Davidson, an academic advisor and recruiter, and Dr. Carole Huberman, the associate dean of business process and an assistant professor.

“I went to Barry and heard about the program and they sold me on it. Listening to them and their advice helped motivate me to get my degree.”

That feeling carried over once Ceasar became an MPA student.

“I really like how they treat you as family,” he said. “They also ensure that you don’t leave their classes without understanding the subject. All of the courses at Barry were really good. I liked the instructors. They made it exciting and challenging. I like challenges, but it wasn’t too difficult.”

He was also able to immediately apply the information in the curriculum to his job.

“I learned the proper way to do research,” Ceasar said. “I still use methods from the classes I took at Barry University. My MPA opened doors. Vincennes University wanted me to come teach with them. Barry also asked me to be a recruiter for them. I might do that. I’m taking it as it comes.”

Ceasar grew up in Fort Lauderdale. He was a four-sport athlete at Boyd H. Anderson High School, participating in football, basketball, track and swimming. Ceasar was still in high school when he found out he was going to become a father.

“I didn’t want to be one of those deadbeat dads, so I was watching TV and saw, ‘Be all you can be,'” he said. “The Army was offering all of this stuff. Instead of me being patient, I had 12 scholarship offers come after I joined the military. The military would not let me out.”

Ceasar made the most of the situation. He went to basic training at Fort Jackson in South Carolina, and served his country. He raised four children — two boys and two girls. One daughter has a master’s degree in criminal justice, while the other daughter was recently promoted to master sergeant in the Air Force. One son is a supervisor with the City of Fort Lauderdale; the other son is working in construction in Seattle.

“I was able to set the example for my kids and grandkids,” he said. “This let them know that you are never too old to complete anything that you put your mind to.”

In addition to work and school, Ceasar still feeds his love of sports as a football, basketball and volleyball referee. He believes no matter what the motivation might be, the MPA program at Barry University is worth the effort.

“Be certain it’s what you want to do,” he said. “It’s a lot of work. My advice to you is to not commit unless you’re ready to commit. You can make it if you never stop dreaming and always go for what you believe in. Never give up.”

Spoken like a man with a rock solid cornerstone.

Have a question or concern about this article? Please contact us.

Articles that appear on this website are for information purposes only. The nature of the information in all of the articles is intended to provide accurate and authoritative information in regard to the subject matter covered.

The information contained within this site has been sourced and presented with reasonable care. If there are errors, please contact us by completing the form below.

Timeliness: Note that most articles published on this website remain on the website indefinitely. Only those articles that have been published within the most recent months may be considered timely. We do not remove articles regardless of the date of publication, as many, but not all, of our earlier articles may still have important relevance to some of our visitors. Use appropriate caution in acting on the information of any article.

Submit this form, and an Enrollment Specialist will contact you to answer your questions.

By submitting this form, I am providing my digital signature agreeing that Barry University may email me or contact me regarding educational services by telephone and/or text message utilizing automated technology or a pre-recorded message at the telephone number(s) provided above. I understand this consent is not a condition to attend Barry or to purchase any other goods or services.

Submit this form, and an Enrollment Specialist will contact you to answer your questions.

By submitting this form, I am providing my digital signature agreeing that Barry University may email me or contact me regarding educational services by telephone and/or text message utilizing automated technology or a pre-recorded message at the telephone number(s) provided above. I understand this consent is not a condition to attend Barry or to purchase any other goods or services.